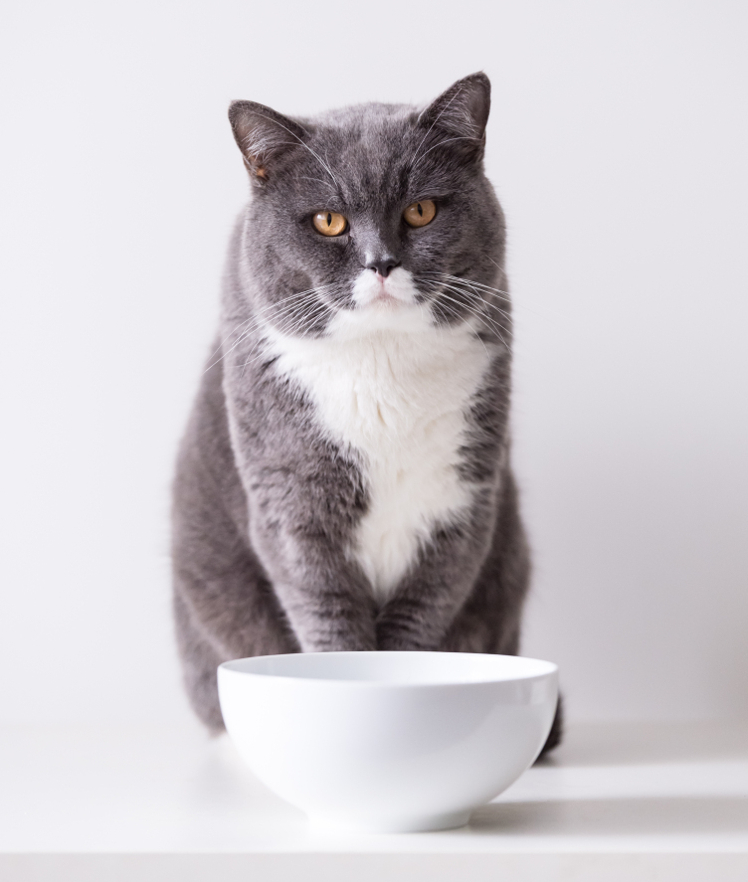 Cats are carnivores. They are built to eat meat, although most can tolerate other ingredients with varying degrees of success. We advocate feeding your cat foods that most closely resemble their natural diet, and to vary the types of foods they eat just like they would naturally do in the wild. In other words, a complete, diverse diet of high quality, high-meat foods.

Cat foods with a high meat content don’t contain lots of fillers (ie carbohydrates that are added to bulk out the food and make it cheaper or allow it to be formed into a dry biscuit). There are many different types of carbohydrates added to cat foods, some of which are called ‘grains’ (like wheat, corn and rice), some are not (like potatoes, peas and lentils). It doesn’t so much matter what they are called, just that they are all relatively unnecessary ingredients as far as the cat is concerned. The only grains a cat in the wild would eat are those found in the stomachs of their prey.

Over the past few decades, grains have developed a bad reputation, branded as unnatural, and with good reason – when was the last time you saw a cat hunting an ear of corn? Savvy owners started to realise that some cats just don’t tolerate large quantities of them in their diet (causing skin problems, gastrointestinal problems etc). Many of these cats, when placed on a grain-free diet, seemed to improve. But is it the fact that they are called ‘grains’, or the fact that they are unnatural plant ingredients that the cat is reacting badly to? Because many high quality, high meat foods are naturally low in carbohydrates like grains, they are indeed a more suitable diet for cats. So in this respect, yes, you probably should feed your cat a ‘grain-free’ diet, especially if they have responded badly to a ‘grain-full’ food in the past.

But, is it that simple? Over the past decade or so, many pet food companies have jumped on the increasingly popular grain-free bandwagon and, as is so often the case, tried to create ever-cheaper versions of them for demanding consumers. Many companies realised that other fillers such as potatoes and peas are not called grains, and could therefore be used to make a cheap, high-carbohydrate but still technically grain-free food. Personally, I find this rather shameful because they are manipulating what used to be good advice and turning it into simply a marketing ploy to get people to buy their mediocre foods over those of other companies. As far as I am concerned, if a food is high in carbohydrates, whether they are called grains or not (can’t picture them pouncing on a sweet potato either…), it is not really suitable for cats. So in this respect, no, I would not recommend a technically grain-free food over any other other high carb option.

To make matters worse, it has recently been suggested by the FDA that some grain-free foods may be related to the development of heart disease in cats and dogs. Many of these non-grain fillers are relatively new to the pet food market, so we are just now seeing the effects of feeding them over several years. The evidence is extremely limited at this time, but it is concerning enough to warrant our attention and I suspect we will be hearing a lot more about it in the coming months.

So, should you feed your cat a grain-free diet? It really depends on what that means. If it is a high quality, high meat food that doesn’t leave room for unnecessarily fillers, then this sounds like a very sensible option to include in your cat’s diet. If it is only grain-free in name and still high in carbohydrates, then I would probably look elsewhere. Don’t be drawn in by marketing hype, take time to look at the ingredients list and see if it contains things that you are happy to feed your cat.

One final note – unless your vet has put your cat on a specific diet for medical purposes, my advice would be to not feed one brand (despite the pet food companies encouraging you to do so!), or especially one flavour, of food exclusively. Feeding just one type of even top-quality food puts your cat at a much higher risk of nutritional deficiencies or excesses because even pet food companies with the best of intentions aren’t perfect. Variety is healthy, a good diet is both complete and balanced, and your cat will probably thank you for it when they don’t have to eat the same boring food day after day after day!