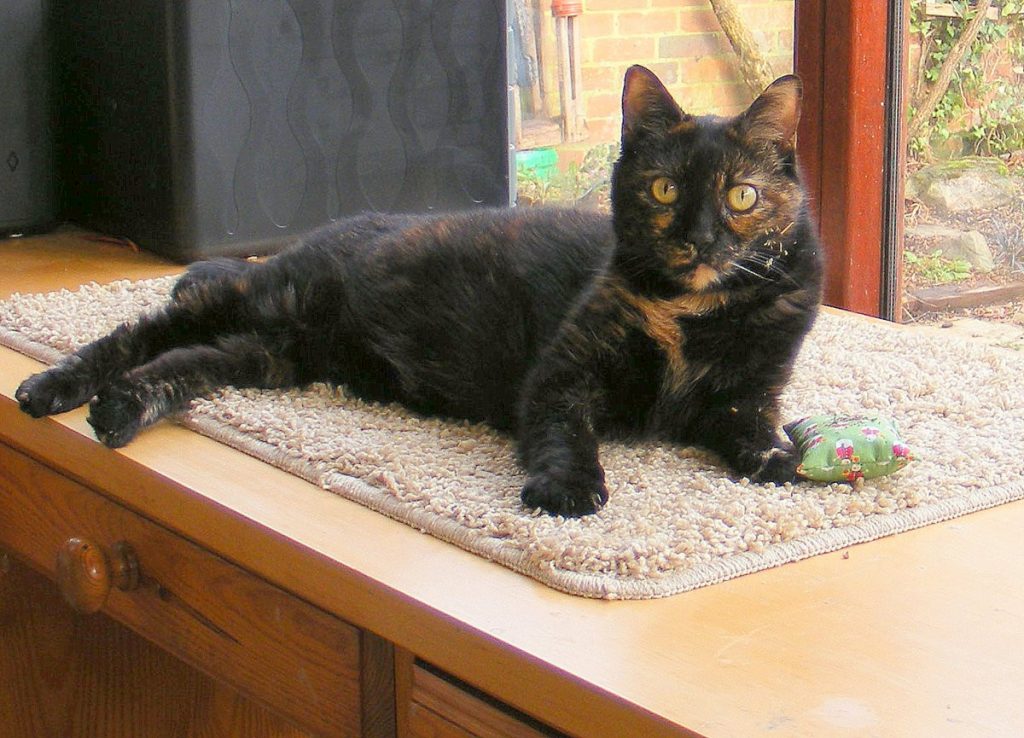 We first met Bonnie in April when Amy got the call to say that she really wasn’t well, having not eaten properly for 4-5 days. Bonnie is a twelve year old moggy who has insulin-dependent diabetes and her very dedicated owners had only adopted her in February and taken on the big task of injecting her everyday. They had always noted how quiet she was since she had arrived and how she led quite a sedentary lifestyle, but the inappetance was a big concern with the diabetes and so we quickly came out to see what was going on.

Nothing really stood out on her physical examination other than noticing that she had very bad breath, so Amy collected some blood and urine and supported her with some subcutaneous fluids, pain relief and anti-nausea drugs. When the blood results came through no-one was as surprised as us! Bonnie was in severe renal (kidney) failure with values in the thousands (when normal should be less than 150). The bad breath was a build up of urea – a toxin normally excreted into the urine by the kidneys.

Now in many cases renal failure is irreversible and there is nothing we can do other than support our patients to make sure they are still eating and leading comfortable lives. However in Bonnie’s case there were some indications that this renal failure was in the acute stages – meaning that if caught early and with the right treatment, it could be reversed. The first indication was that her urine cultured a nasty bacteria showing that there was infection somewhere along her urinary tract – so antibiotics were added to the treatment plan. The other sign was that one of her blood levels was quite high indicating a potential obstruction in her urinary tract. We knew that Bonnie was urinating so her urethra was not blocked, but was there something further up that was causing an issue?

After a few days of supportive fluids, pain relief and antibiotics Bonnie was feeling a lot better and Nikki was able to perform an ultrasound scan and try to ascertain what was going on. This remarkably showed that Bonnie had had an obstruction in the tube leaving her left kidney and entering the bladder (the ureter). This had caused the kidney to overfill with urine (hydronephrosis) leading to eventual function loss and shrinkage, whilst the right kidney enlarged to cope with the increased workload. The left kidney measured 3.3cm and the right 5.5cm (normal kidneys are usually 3.5-4cm in diameter). Sat in her bladder were also two stones – most likely calcium oxalate – which were the likely culprit of the blockage, but had luckily passed down and relieved the obstruction on the right side.

It is likely that the left kidney was no longer functioning, but Bonnie was able to survive with just the right kidney and a week after her initial blood tests, her results were amazingly back to normal. This case yet again demonstrated to us the shear resilience of some cats in the face of immense pain, and reminds us to always look for an underlying cause if we are able to. Happily Bonnie has continued to do well, although she will monitored closely from now on for any small signs that she is under the weather!