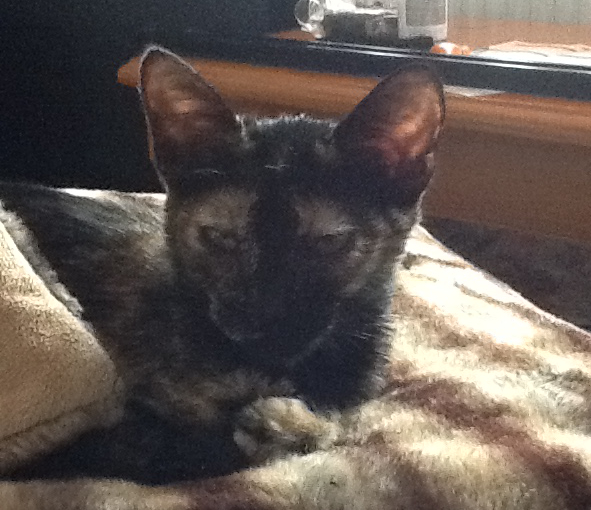 Paloma was a happy, healthy, bouncy 4 month-old kitten living under the care of a cat charity in Spain, waiting to find a new home. With little chance of a local adoption, the decision was made to send her to live with a family in England who had kindly agreed to take her on. She was checked by the local vet and sent on her big journey to the UK.

Upon arrival, Paloma met her new family straight away. Norman, the family’s other cat didn’t seem to mind the new addition, and they were even seen curling up together on the bed. That night she started to sneeze but was still very playful and seemed to be settling in nicely.

We were called out to visit Paloma at home two days later, as her sneezing had worsened, her eyes were closed and she wanted to sleep all day – early signs of cat flu. The family got in touch with the shelter she came from who later confirmed that Paloma had never received her vaccinations because the shelter manager ‘didn’t believe in them’. Everyone’s heart sank.

Despite her new medications, Paloma’s illness worsened so we brought her into hospital to provide more intensive supportive care for her worsening cat flu. At first she seemed to improve but after a few days her condition deteriorated. She stopped eating and her breathing became laboured as her upper respiratory infection descended into pneumonia. Her young and naïve immune system was simply unable to fight off the virus and after seven days we made the heartbreaking decision that euthanasia was the kindest option.

Paloma’s death could have been prevented

About a week after first meeting Paloma, the family’s other cat Norman developed symptoms of Paloma’s flu virus, which was probably a calicivirus. Fortunately, the family had had Norman vaccinated regularly so although we were concerned, we were hopeful that his body would be able to fight the infection. He had a few uncomfortable days but thankfully his condition improved and he was able to make a full recovery. If Paloma had received her standard kitten vaccinations before she travelled, chances are that she, too, would have survived the virus.

Every cat deserves to be vaccinated

It is so easy to become complacent about vaccination these days. Most people vaccinate their cats, which means we rarely see things like fatal calicivirus and panleukopenia. As a result, chances are reasonable that the odd cat who misses their vaccinations may be just fine. Paloma’s case is a stark reminder however that these viruses are very much still out there and it’s simply not good enough to rely on everyone else to vaccinate their cats.

Getting vaccinated doesn’t mean that your cat won’t become infected with viral diseases like herpesvirus or calicivirus (two of the main causes of cat flu), but it does mean that their immune system will be better able to cope with the virus should they become exposed to it, as in Norman’s case. Because these viruses can be spread through the air or by indirect contact (for example, you touch an infected cat then go home and stroke yours), exposure is difficult to predict and almost impossible to prevent. Going to the cattery or visiting the veterinary clinic can increase the chance of exposure, despite even the best infection control measures. All cats are at risk, no matter how sheltered their lifestyles may be.

Paloma’s death was an avoidable tragedy and a devastating loss for us, her new family and her carers back in Spain. Shreen and I will never forget her and can only hope that her unfortunate tale inspires others to consider the consequences when deciding whether or not to have their cat vaccinated. Let’s do everything we can to make sure it never happens again.